Opinion: Brexit Is a Tragedy, but It Could Be the Making of UK Fintech

Brexit could be the making of the UK’s fintech sector – and even the trigger point that transforms some British companies into world leaders. 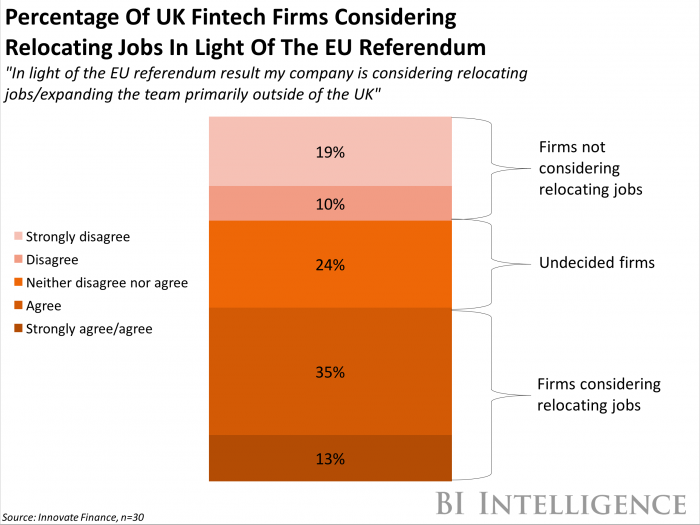 Fintech Companies Have Spoken About Brexit

Innovate Finance, a U.K. members association for fintechs, surveyed its members about the effects of Brexit on fintech companies. The association plans to present its findings to national and local governments in London as a way to influence new negotiations between the U.K. and the European Union.

Far from being an economic disaster, a British exit from Europe could be the best thing that's ever happened to UK fintech, says Michael Jackson, partner at Mangrove Capital and former COO at Skype.

Eight weeks ago I wrote Part 1 of this post called #Brexit good for UK #FinTech and got an overwhelming response - mostly abuse! 😫 I had to double check my post to make sure I hadn't inadvertently insulted somebody's prophet or, worse, suggested again that Bitcoin is just an over-hyped big waste of electricity! Turns out I simply held a controversial and, what I thought at the time to be, minority view.

"Obviously Brexit creates uncertainty and uncertainty is not good," said Hank Uberoi, CEO of Earthport, a London-based global payment services company. "But the reality is, nothing is going to change in the next couple of years other than wondering what's going to happen and London has a significant amount of advantages."

Those advantages include a credible regulatory system, a strong educational system, a good source of talent, according to Uberoi, who thinks these characteristics will remain in place regardless of Brexit.

Fintech after Brexit: 3 Positive and 3 Negative Impacts While the overall balance of Brexit on fintech is clearly negative, this article takes a look at the positives too.

Deutsche Bank shares hit a new record low today. Its value has halved since the beginning of the year. So is it now the most dangerous bank in the world? According to the International Monetary Fund - yes.

Chinese search engine Baidu has entered the financial revolution that is FinTech for the first time with an investment in an American Blockchain company.

Circle Internet Financial Inc. was founded in 2013 by Jeremy Allaire and Sean Neville in Boston, Massachusetts and has an international operations headquarters in Dublin, Ireland.

MasterCard is facing a £19 billion lawsuit - claimed to be the biggest in UK legal history - over allegations that it imposed "illegal" card fees that were ultimately borne by UK consumers.